Solution of Marriage Problems by the Help of Vedic Astrology

HomeBlogAstrologySolution of Marriage Problems by the Help of...

Solution of Marriage Problems by the Help of Vedic Astrology

Marriage is one of the most important aspects of life as it opens a different perspective of life. It brings innumerable changes in human’s life as the responsibility changes. So there are many problems too and this can be avoided by Vedic astrology according to the best astrologer in Kolkata.

However not everyone is blessed with happy married people. Many people go through the problems.

So is there any rigid solution to all these marriage related problems?

We must face the planetary cause behind the problems and act accordingly. The planets are the celestial bodies in any married life according to the best astrologer in Kolkata.

These karmic results provided by the planets significantly affect the various aspects of life. So to have a successful marriage life it is extremely important that they must have positive planetary influences backing them up.

Vedic astrology is one of the ancient sciences that decides the aspects of a planet in an individual’s life and provides remedies that reduce the trouble.

Let us look into the malefic and benefic planets!

There are three malefic planets that cause problems in various domains of a person’s life.

Saturn : This planet is known to cause delay in one’s marriage. It also reduces the element of love and romance that every married couple face after post marriage.

Rahu : This planet causes sudden loss of bliss and harmony from a person’s married life and also for endless bickering and bitterness between the married couple.

Ketu: This creates an emotional void between the married couple that brings distraction.

While there are three naturally malefic planets that negatively impact the marital domain of a native’s life, there are two naturally benefic planets as well that are considered extremely positive for one’s married life.

These Two Naturally Benefic Planets are:

Venus: This planet is the Natural Significator of Marriage and a strong & well placed Venus wards off the malefic planetary effects that negatively influence a person’s married life.

Jupiter: This planet when well placed in the Horoscope of even one among the married couple is considered extremely positive for childbirth and ensures a happy, blissful & prosperous married life for the couple. 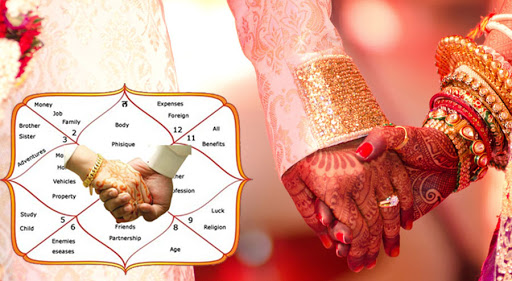 Mars or Mangal is one planet that is considered as extremely dangerous for the marital aspect of a person. An ill placed Mars in the Kundli or Horoscope of a person creates a Mangal Dosh or Manglik Dosha.

Mangal Dosh is basically a highly detrimental planetary flaw that gets generated by an ill placed Mars in a native’s Horoscope. It wreaks havoc in the married life of a person unless treated timely & properly by powerful Vedic Rituals or Remedies that are conducive to one’s Natal Horoscope according to the famous astrologer in Kolkata.